The Département des Alpes-Maritimes organized in April 2017 the first edition of the Gardens Festival, on the theme of the “Awakening of the senses”, and had a tremendous public. Based on this success, the Festival is held for a second edition: scheduled from 30th March  till 28th April 2019, on the ” Mediterranean Dreams ” theme, an invitation to travel and discover gardens of the countries bordered by the Big Blue: France, Italy, Spain, Greece, Maghreb countries, etc. But also an invitation to meditate on environmental issues and water management in the Mediterranean basin. 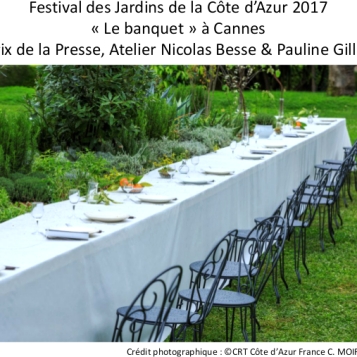 The Festival will follow the guidelines of the Energy Transition Law for Green Growth which, since January 1st 2017, has prohibited the use of agrochemicals called “pesticides” by local authorities in public green areas. And it is already launched the landscape design contest for this second edition open to all landscape professionals. Open since April 2018, the application forms are available on the Festival website until September 28th: https://festivaldesjardins.departement06.fr. The contest is open to landscape professionals, landscape architects, gardeners, but also to designers, artists, scenographers, decorators, provided that they are backed by a landscape company for the realisation of the garden. The creations made by local, national and international teams will be spread among 5 main Municipalities of the Département des Alpes-Maritimes: Antibes-Juan les Pins, Cannes, Grasse, Menton and Nice. In each Municipality 3 landscaping creations of 200 m2 each will be realised, instead of 2 in 2017, in order to produce a “showcase” particularly attractive to the public, leading to 15 creations throughout our territory. A Technical Selection Committee composed of professionals from the French and foreign sectors, the UNEP (National Union of Landscaping Companies), the FFP (French Landscape Federation), Green Spaces and Gardens Directors of the hosting Municipalities, and still chaired by the renowned Architect Jean MUS, will choose the 15 selected projects in November. The official jury composed of media personalities, representatives of the chosen theme and the Département will name the winner at the end of the Festival, in late April 2019. As in 2017, 3 prizes will be awarded: the jury prize, the professional prize and the press prize.