Until August 25th 2019, Het Noordbrabants Museum in ’s‑Hertogenbosch will be in full bloom thanks to the colorful exhibition ‘The Smell of Success: Gerard & Cornelis van Spaendonck, Painters of Flowers in Paris’. This exhibition tells the story of two Brabant brothers and their successful careers in Paris around the time of the French revolution. Recent research suggests that both flower painters enjoyed prominent positions within the Paris art scene around the year 1800. This discovery prompted Het Noordbrabants Museum to present their work in a wider historical context. 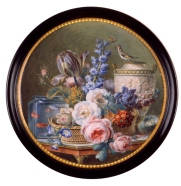 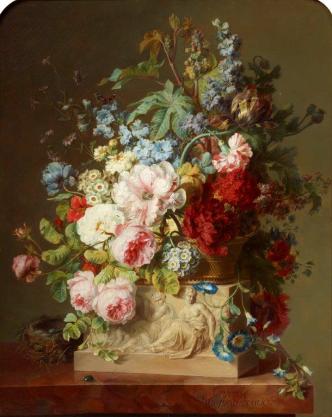 Brabant brothers Gerard (Tilburg, 1746 – 1822, Paris) and Cornelis (Tilburg, 1756 – 1839, Paris) van Spaendonck learned the painter’s trade in Antwerp. From there, Gerard went to Paris, followed later by his brother Cornelis. The two soon made careers for themselves as painters of flowers. At the time, there were no leading flower painters in Paris and so the brothers were able to distinguish themselves. King Louis XVI even appointed Gerard as a royal miniature flower painter, whilst Napoleon would acknowledge his achievements with the Order of the Legion of Honour. For a brief period, Cornelis held the position of artistic director of the porcelain manufacture in Sèvres. The paintings of the Van Spaendoncks decorated the salons of the French aristocracy – none less than the private apartments of Marie-Antoinette herself – whilst their influential miniatures of still lifes with flowers on snuff boxes and powder compacts were in great demand among the wealthy bourgeoisie. The prints of their botanical studies were produced in high volumes and in multiple editions and colours and sold for a considerable profit. As a result, the brothers eventually occupied a dominant and influential position within the art scene; a position that they were able to maintain both during and after the turbulent period of the French revolution. The exhibition displays still lifes of flowers, miniatures on snuff boxes, engravings with botanical studies, letters and portraits by both brothers from collections in Belgium, France, and the Netherlands. With over 30 objects from its collection, Het Noordbrabants Museum possesses the largest collection of pieces by the Van Spaendonck brothers in the Netherlands. The exhibition is enhanced with historical objects relating to the eventful period in which they lived. The exhibition The Smell of Success is accompanied by a richly illustrated catalog written by curator Paul Huys Janssen and will be available at the MuseumShop and bookstore.