Gardens of Peace: a landscape and architectural history of war cemeteries

Belgian publisher Mercatorfonds presents the work and research of Michel Racine, professor at the National School of Landscape in Versailles, France, in collaboration with the photographer Christine Bastin and Jacques Evrard, about the quality and variety of landscape interpretations for military cemeteries and memorials created by landscape designers and architects from Britain, Germany, America, France, and their allies, from the Great War until the present day. 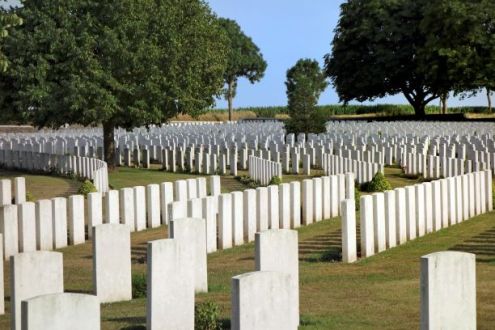 The wealth of splendid photography in this singular publication features military cemeteries and memorials, conveying their grace, solemn beauty, and deep emotional resonance. Hundreds of cemeteries and memorials from the First and Second World Wars are featured—locations throughout Europe with particular emphasis on sites in England, France, Belgium, and Germany. The book’s essays delve into the landscape and architectural history of these hallowed spaces, which were designed by architects such as Charles Henry Holden, Edward Luytens, John Russell Pope, and Robert Tischler, among others. These landscapes, each a campaign for remembrance and peace, take on new significance alongside comparative images of more recent memorials, including the Vietnam Veterans Memorial in Washington, D.C., and the National September 11 Memorial in New York.  This beautifully illustrated volume, published in French and English explores the histories and present-day states of European burial sites and memorials from the First and Second World Wars.