David Austin Roses has been awarded a gold medal for the rose garden at the Chelsea Flower Show 2018: a quiet, reflective space to stop and smell over 400 varieties of roses, which lead the visitor to a table dressed with a quintessential English afternoon tea. The garden provided the backdrop for the launch of three new varieties, ‘Emily Brontë’, ‘Tottering-by-Gently’ and ‘The Mill on the Floss’, which were positioned at focal points within the display. The Brontë Society asked David Austin Roses to name this rose to celebrate the bicentenary of the birth of the novelist, Emily Brontë. Her much-loved novel ‘Wuthering Heights’ was published in 1847, a year before her untimely death at the age of 30. The rose is exceptionally beautiful with the distinctive blooms, very neat and rather flat. Each bloom is a lovely soft pink, with a subtle apricot hue, the smaller central petals deepening to rich apricot and surrounding a button eye, which unfurls to reveal deep-set stamens. The strong Tea fragrance becomes more Old Rose, with delicious hints of lemon and grapefruit. It forms a bushy shrub with strong, healthy, upright growth.

THE MILL ON THE FLOSS 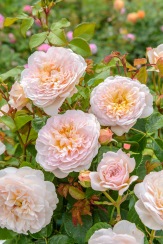 ‘Tottering-by-Gently’ is named to celebrate the 25th anniversary of Annie Tempest’s classic weekly cartoon, first published in Country Life magazine in January 1993. The rose is beauty in the simplicity of its single flowers and the spectacular display they create when viewed en masse. Held in large, open sprays, the yellow flowers open to reveal golden stamens. Paling prettily over time, they have a light musky scent, with fresh notes of orange peel. It flowers freely, repeating regularly throughout the summer. ‘The Mill on the Floss’ is named after the novel by George Eliot, first published in 1860. The story centres around the fiercely intelligent Maggie Tulliver, and her beloved brother, Tom. It’s a healthy variety; it makes a bushy shrub, clothed in glossy foliage. Bears large clusters of small, neat, deeply cupped blooms, each eventually revealing a small boss of stamens. Initially mid pink, verging on lilac-pink, they pale as they open, the individual petals beautifully defined by their carmine edges. Held nicely above the foliage, they nod gracefully on gently arching growth, and have a sweet fruity fragrance.