The greatest Glasshouse in the world re-opens

On May, Kew Gardens completed the largest restoration project in its entire history, the doors of its spectacular Temperate House are now open, revealing 10,000 breath-taking plants, making this magnificent structure the true jewel in Kew’s crown – an architectural wonder, horticulturists’ haven, the most captivating of classrooms.
The world’s largest Victorian glasshouse, first opened in 1863, will be home to some of the world’s rarest and most threatened plants. In contrast to their sumptuous, romantic surroundings, these plants present a stark message; despite being the foundation of pretty much all life on earth, we are allowing them to fall prey to a variety of threats.  The Temperate House tells the stories of the plants that Kew has rescued, and the journeys they have taken to reach the sanctuary of their new home. 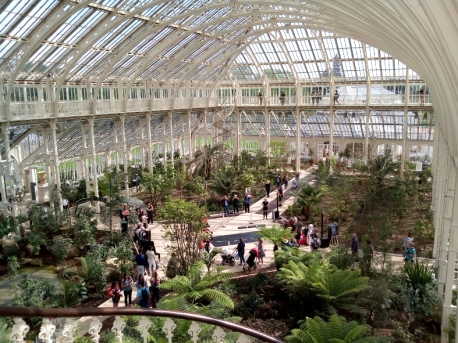 At the start of the restoration of the Temperate House, 500 plants were removed from the glasshouse and housed in a temporary nursery behind the scenes, to be propagated and nurtured by Kew’s leading horticulturists. From September 2017, 10,000 plants have been carefully re-planted into the newly restored structure. The glasshouse is now home to a world of luscious plant life and sumptuous, romantic beauty, but it also reveals an urgent message, that plants are the foundation of all life on earth, and they are in trouble. With the global challenges of climate change, biodiversity loss and food security, these incredible plant collections, resplendent in their newly renovated home, will highlight Kew’s role in safeguarding rare and threatened plants from extinction. The Temperate House is home to some of the world’s rarest and most useful temperate plants. The temperate zones occupy the ‘Goldilocks’ regions of our planet – where the climate is just right, not too hot and not too cold. Most of the Earth’s temperate zones exist between the poles and the tropics in the northern and southern hemispheres. There are also smaller pockets or niches of temperate climate, found at high elevations, on mountains within the tropical zone. The Earth’s temperate zones are important because they are the places where most of us live, build our cities and clear land for agriculture. Plants native to temperate areas are becoming increasingly rare and threatened. These plants reside at a critical frontline of global change; here they are forced to deal with an array of extinction risks – many of which are caused by humans.