A Journey in the Gardens of Europe, from Le Nôtre to Henry James

The Venaria Reale complex, a masterpiece of architecture and landscape with 80 hectares of gardens, declared UNESCO World Heritage, hosts, until the 10th November 2019, the exhibition ‘Journey in the Gardens of Europe. From Le Nôtre to Henry James’. The extraordinary “adventure” across European gardens through the continuum of stories told by famous eighteenth- and nineteenth-century travelers who visited the largest and most beautiful parks on the continent. Architects, landscape designers, princes, writers, intellectuals and scholars traveled across Europe for centuries, visiting gardens, admiring landscapes and drawing inspiration from them. 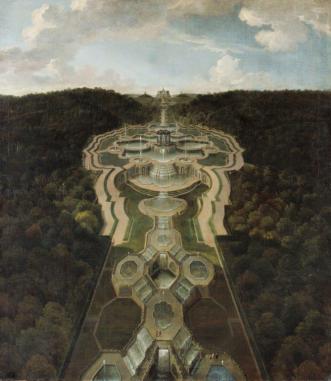 The exhibition unfolds across adventurous storylines, structured into twelve sections, in which about 200 works, including paintings, drawings, wooden models and other objects showcase famous sixteenth to early twentieth‐century gardens: from the Italian geometrical settings to the prospective escapes of their French counterparts and the “picturesque” elements of English landscape architectures. In the context of the Reggia di Venaria and its Gardens, this journey – through the works of both known and less known artists ‐ travels across Italy of the “Grand Tour” and the Europe of kingdoms and empires, whose gardens of villas and palace function at once as loci of power and “fashionable” phenomenon, summoning distant and dreamed worlds. The exhibition was organized and implemented by Consorzio delle Residenze Reali Sabaude, in partnership with the Polytechnic University of Turin, Department of Architecture and Design (DAD), and Associazione Parchi e Giardini d’Italia (APGI), with the patronage of the Association des Résidences Royales Européennes (ARRE). The exhibition begins with the journey of Montaigne who takes us to Italy’s most famous sixteenth-century gardens, including caves, automatons and creative water displays, while in the following century André Le Nôtre’s journey offers the opportunity to illustrate the dissemination in Europe of a new way of conceiving large‐scale complexes, appreciated by great and small Sun Kings. With the affirmation of the new fashion of the English garden, also promoted by the awareness of Chinese gardens and their forms inspired by nature, England ‐ together with France and Italy ‐attracted architects and gardeners, such as Swedish Fredrik Magnus Piper and Italian Francesco Bettini. The English garden became popular throughout Europe. In France, Carmontelle organized the future Parc Monceau according to a succession of scenes, proposing an imaginary journey through me and space within the same (from East to West). At the end of the eighteenth century, the travels of aristocrats ‐ the Count and Countess of the North, heirs to the throne of Russia, and the Prince de Ligne ‐ take us to the major European gardens about which they sometimes unhesitatingly express harsh opinions. The gardens of the Peninsula are a must stop for the “Grand Tour”. Painters like Hubert Robert and Fragonard came to Italy to depict the best-known gardens in their state of decadence, and the former, upon returning to France, would eventually toy with garden design. “President” Charles de Brosses and Stendhal crossed the Peninsula from north to south, up to Naples, while on his journey in the sign of his inner rebirth, Goethe went even further, reaching Sicily. Between the nineteenth and twentieth centuries, with two exceptional American travelers, Henry James and Edith Wharton, Italy were confirmed as a land of gardens and a source of inspiration for overseas green oases.